Michael Wayne Rosen (called Mick for short by his family) is an English poet and book writer. He has a YouTube channel by the name of ArtificeDesign (later Michael Rosen and then Kids Poems and Stories With Michael Rosen) and another much less active and somewhat obscure one where Michael reads off and performs poems for adults called Michael Rosen For Adults with both channels having a combined total of over 320+ videos of him performing his poems, ranging from under a minute to over 5 minutes in length.

The poems differ in setting, some being recorded in a more reverberant studio, and others being recorded in front of a dark screen (although some of his videos consist of him performing his poems live in front of an audience). Most of his poems are based on his misadventures with his family (some being about Michael when he was a kid while others are about Michael being a dad.)

On July 10 2009, a YouTube Pooper by the name of 'kronoix' uploaded a YouTube Poop of Michael's Cbeebies source, although this may have been the first, the most popular Michael Rosen YTPers at the time were Insector (now known as ricesnot), DerryMarksun and ImperialLobster.

It didn't take long for Michael Rosen himself to discover the YouTube Poops hundreds of YTPers were making on a daily basis, as expected, he attempted to take them down from YouTube. This resulted in many Rosen poopers being banned, or at least having their poops taken off. However, this did not stop the Rosen community from making their sweet, glorious YTPs, so Michael eventually gave up, and allowed the YTPers to reign supreme.

After the fiasco, Michael was asked about the YTPs in a Q&A, to which he described the YTP community as 'teenage boy masturbators from Pennsylvania', despite most Michael Rosen YTPers originating from Britain. Michael later starred in a video 'thanking' the YTPers for pooping him, all the while his face turned more red than a tomato.

Michael doesn't necessarily mind the vulgarity of the poops, he worries more about children or parents discovering his poops and associating them with his character.

Michael has not since taken down any YTPs since 2011.

However in 2017, Michael reported that he was going to take down more YouTube Poops that included "Nazi's" and "Nazi imagery" because of his religious status. It is not known what poops were taken down.

Michael Rosen as a kid.

Michael Rosen at a Woodcraft folk camp in the Mendip Hills, 1959. 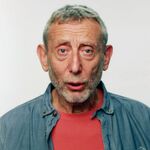 Michael sliding his top lip one way and his bottom lip the other way. Taken from the poem I Know Someone.

Michael doing a face that looks similar to the 'Not Bad' meme with Barack Obama. A frame taken from a Michael Rosen Poetry Friendly Classroom video.

Retrieved from "https://michaelrosen.fandom.com/wiki/Michael_Rosen?oldid=11011"
Community content is available under CC-BY-SA unless otherwise noted.