This article is a stub. You can help Plumtopia - The Michael Rosen Wiki by expanding it.

Filming his dad for videos on his channel(s).

Joe Rosen is one of the children of Michael Rosen and is the one who films most of Michael's poem and story videos on Michael's YouTube channels. He is a character in some of Michael's poems such as Eddie and the Car and The Hollywood.

Joe is also a short film writer, producer and director. One film he's made is called Satisfaction Guaranteed. He has made work for companies such a Samsung.

Joe setting up a livestream for the Michael Rosen YouTube channel 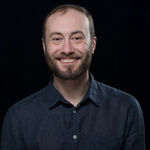 Joe smiling
Add a photo to this gallery

Retrieved from "https://michaelrosen.fandom.com/wiki/Joe_Rosen?oldid=10891"
Community content is available under CC-BY-SA unless otherwise noted.